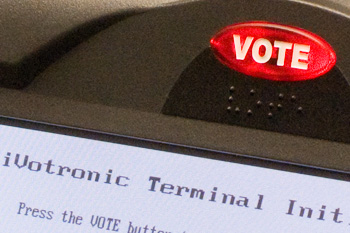 Current electronic voting systems have been widely -- and justifiably -- criticized for being insufficiently secure against vote tampering and other kinds of election fraud. I led the team at U. Penn that examined the ES&S iVotronic -- the same machine used in Kentucky -- as part of the Ohio EVEREST voting systems study in 2007. We found numerous exploitable security weaknesses in these machines, many of which would make it easy for a corrupt voter, pollworker, or election official to tamper with election results (see our report [pdf] for details). Other studies have reached similarly grim conclusions about most of the other e-voting products used in the US and elsewhere. But these results, alarming as they are, also raise a perplexing question: if the technology is so vulnerable, why have there been so few (if any) substantiated cases of these systems being attacked and manipulated in actual elections?

A plausible explanation is simply that the bad guys haven't yet caught up with the rich opportunities for mischief that these systems provide. It takes time for attackers to recognize and learn to exploit security weaknesses in new devices, and touchscreen voting machines have been in wide use for only a few years (most US counties purchased their current systems after 2002, with funding from the Help America Vote Act). For example, the computers connected to the Internet were for a long time largely vulnerable to network-based attack, but it took several years before viruses, worms, and botnets became serious threats in practice. In other words, new technologies sometimes enjoy an initial relatively crime-free "attack honeymoon" in which even very weak defenses seem to be sufficient. But eventually, the criminals arrive, and, once they climb the learning curve, the world becomes a much more hostile place very quickly.

We might ask, then, what the (alleged) Kentucky conspiracy tells us about the e-voting attack honeymoon. Are the bad guys catching up? On the one hand, we might be comforted by the relatively "low tech" nature of the attack -- no software modifications, altered electronic records, or buffer overflow exploits were involved, even though the machines are, in fact, quite vulnerable to such things. But a close examination of the timeline in the indictment suggests that even these "simple" user interface exploits might well portend more technically sophisticated attacks sooner, rather than later.

Count 9 of the Kentucky indictment alleges that the Clay County officials first discovered and conspired to exploit the iVotronic "confirm screen" ambiguity around June 2004. But Kentucky didn't get iVotronics until at the earliest late 2003; according to the state's 2003 HAVA Compliance Plan [pdf], no Kentucky county used the machines as of mid-2003. That means that the officials involved in the conspiracy managed to discover and work out the operational details of the attack soon after first getting the machines, and were able to use it to alter votes in the next election.

Yes, the technique is low-tech, but it's also very clever, and not at all obvious. The only way for them to have discovered it would have been to think hard and long about how the machines work, how voters would use them, and how they could subvert the process with the access they had. And that's just what they did. They found the leverage they needed quickly, succeeding at using their discovery to steal real votes, and apparently went for several years without getting caught. It seems reasonable to suspect that if a user interface ambiguity couldn't have been exploited, they would have looked for -- and perhaps found -- one of the many other exploitable weaknesses present in the ES&S system.

But that's not the worst news in this story. Even more unsettling is the fact that none of the published security analyses of the iVotronic -- including the one we did at Penn -- had noticed the user interface weakness. The first people to have discovered this flaw, it seems, didn't publish or report it. Instead, they kept it to themselves and used it to steal votes.