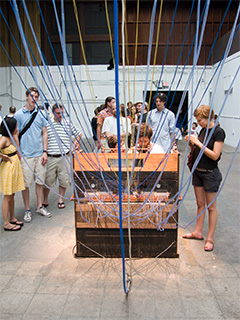 I had a great time yesterday at David Byrne's Playing the Building auditory installation (running through August in the Battery Maritime Building in lower Manhattan). It involves an old organ console placed in the middle of a semi-abandoned ferry terminal with various actuators hooked up throughout the building. The structure itself -- its pipes, columns, and so on -- makes the actual sound, under the control of whoever is at the console. You can read more about the project at davidbyrne.com.

Anyone can just go in and spend a few minutes playing the building. There's no real way to prepare ahead of time or directly apply expertise with another instrument; to make sound you have to experiment. So every performance by a visitor is by necessity an at least somewhat playful exploration. (There are apparently also occasional scheduled performances by musicians who've actually rehearsed with the contraption, but there wasn't one while I was there yesterday).

The result is surprisingly successful at blurring the distinctions between performer and audience, professional and amateur, work and play, signal and noise. An almost incidental side effect is some interesting, and occasionally hauntingly beautiful, ambient music. It reminded me of some of the early field recordings of Tony Schwartz (a terrific body of work I discovered, sadly, through his recent obituary on WNYC's "On the Media").

Given the nature of the piece, it was a bit incongruous to see almost everyone taking pictures of the console and the space, but hardly anyone recording the sound itself, at least while I was there. Presumably this has something to do with the relative ubiquity of small cameras versus small audio recorders, but I suspect there's more to it than that. The commercial and artistic establishment routinely prohibits "amateur" recording in "professional" performance spaces, and we've become conditioned to assume that that's just the natural order of things. (We're also expected to automatically consent to being recorded ourselves while in those same spaces, but maybe that's another story.) Amateur documentary field recording seems in danger of withering away even as the technology to do it becomes cheaper, better, and more available. In fifty years will we be able to find out what daily life in the early part of this century really sounded like?

Anyway, bucking this trend I happened to have a little pocket digital recorder with me and so I made a couple of brief recordings. (Here, I was cheerfully told, recording is perfectly fine.) Every minute or two a different (anonymous) visitor is at the console (there was a steady line). Most people played with a partner; a few soloed.

Each 256Kbps stereo .mp3 file is about 12 minutes long and about 21MB. I'll post the (huge) uncompressed PCM .wav files to freesound.org shortly.

(Note that these were not recorded at the same time; I only had the one recorder with me).